Unsound Foundation twists a slow blade through the delicate veil between alternative rock and dark soul. When Tim Cravens, (guitar/vocals), Josh Odaffer (bass/vocals), and Allen Kronenberger (drums) step onto the stage, punk bleeds through post grunge into a gauzy mesh of rock. Since 2011 they’ve been playing shows and winning fans around southern California, from San Diego to the Sunset strip.

Roommates Tim Cravens and Josh Odaffer began jamming and songwriting together with Josh on drums in 2010, but when Unsound Foundation was formed in 2011, Josh stepped out from behind the kit to play bass. The band still actively searching for its own rhythmic soul, headed into the studio to record using a temporary vocalists to fill the lead position before ultimately taking on the mantle themselves.

The band celebrated the release of their debut EP, Fundamentals, in July of 2012 with vocalist Jeanna Fournier and in the spring of 2017 Allen Kronenberger enthusiastically took the open spot behind the drum kit.

Unsound Foundation takes the stage at every opportunity and those opportunities come more and more regularly. What else would you expect? Clearly, the more you twist the blade, the more things flow 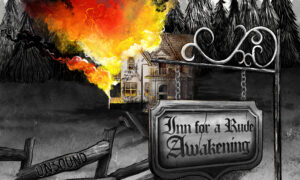